Richard and I ventured out the other night to one of his collegues from works place for a fundraiser function for Bill Richardson the New Mexican Govenor. It was an interesting evening they have a lovely house and there was a good mariachi band playing and the food was good. Some of Richard's other collegues were there and it was good to meet them too. We didn't go and shake the govn'rs hand, he can speak well (as you'd hope really) and it was a crowd of old friends and public service people so the speech was directed at what they had achieved in the last term and the goal for the current election. Richard's suit got an airing which it hasn't had since we've been here.
Posted by Christine at 3:46 pm No comments:

Oh for a quite life.

Why do I do this to myself. We have had teacher problems at school. Our new teacher and our old one don't seem able to communicate with each other. So muggins is trying to mediate and see if they can work together or if we should let the new teacher resign after less than a month.
It's very frustrating because I feel like the children are missing out on the talents avaliable in the new teacher because they can't figure out how to work together.
Posted by Christine at 3:41 pm 1 comment:

Up, up and away 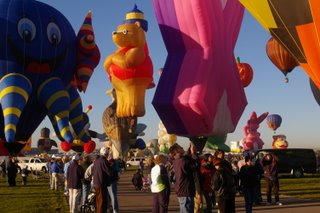 There were plenty of beautiful balloon options avaliable at the Special Shapes Rodeo Mass accention which we went to this morning. It involved a 5am start so that we could drive to Alburquerque by dawn but it was fanatastic to see the Dawn patrol balloons going up as the sky started to light up.
By about 8am an amazing array of shapes had lifted off and floated by. Highlights were the cow, the horse and chillis, the space shuttle was pretty spectacular too.
The weather today was perfect, clear blue sky and almost no wind, so the balloons lifted up flew around the park and landed, some back in the place they started from. Following the rodeo event was a prize grab where the ballonists flew from a mile away to collect a tag from the ground and fly off. Great to watch as the huge array of colours flew in dropped and lifted and landed near by. There were balloons all over Albuquereque.

We had thought of going down on sunday and started out early but it was spittling and the rain got heavier so it was cancelled. I'm glad really 'cause I'd forgotten my camera. Today I took 235 picutres ( I won't bee posting them all) so should you NEED a picture of hot air balloons I might have just what you're after.
Posted by Christine at 12:34 pm 3 comments:

Madeline got a new hat in a parcel from Canada
Posted by Christine at 11:28 am No comments: 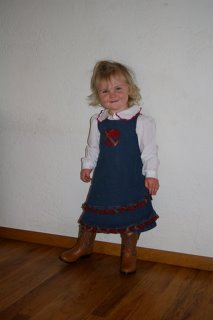 Madeline got a parcel of clothes from friends here and we shopped for the boots - we think Aunty Megan might like to be allocated this gift. They are very popular. 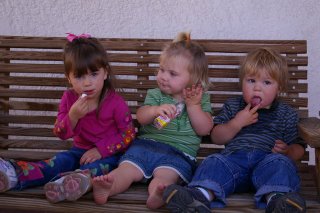 Madeline and her firends shared a jar of sprinkles at her party. The main activity was icing cupcakes with tubes of icing and decorating with sprinkles.

Liam's friend has decided he's going to teach us "English" it's making for some amusing conversations. Last night he started with "dinner" I happened to have said tea is ready. This morning trousers are "pants". I know he and Liam have had some other conversations related to this.
Posted by Christine at 7:49 am 3 comments: